Rodgers was about 29 years old, and a private in the 71st Regiment (later The Highland Light Infantry), British Army during the Indian Mutiny when the following deed took place on 16 June 1858 at Marar, Gwalior for which he was awarded the VC:

For daring conduct at Marar, Gwalior, on the 16th of June, 1858, in attacking by himself a party of seven Rebels, one of whom he killed. This was remarked as a valuable service, the party of Rebels being well armed and strongly posted in the line of advance of a detachment of the 71st Regiment.

Rodgers returned to Glasgow and died in a domestic accident. He visited his sister in order to get an alcoholic drink but was refused and told to lie down in her flat. Some time later Rodgers got up and found a bottle of sulphuric acid and thinking it was alcohol, drank it, causing his death on 9th March 1870. He was buried in a common grave in the Southern Necropolis.

A ceremony organised by the Royal Highland Fusiliers and Mrs Mary Fairbairn of Abercorn Memorials, Edinburgh, took place on the 1st December 2004 in Glasgow's Southern Necropolis, to place a memorial stone over the previously unmarked grave of Private George Rodgers VC. 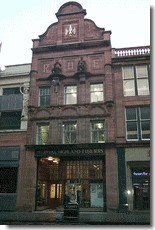 For more information about George Rodgers and the RHF.